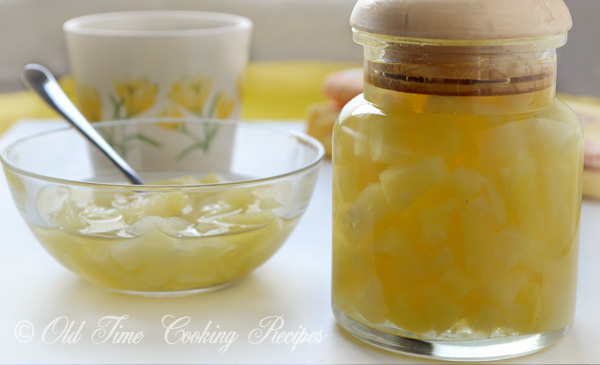 Almost every one likes canned pineapple, but some housewives stopped canning this fruit because they found that when cooked in sirup it seemed to get tough and less palatable. Vegetable and fruit fibers are toughened when cooked with sugar for any length of time, so in all cases where you desire to keep the product as Nature grew it avoid this form of cooking.

When the product is put into the jars with a sirup and cooked in the jar you will have a product superior to the one that is cooked over the direct fire in the kettle with the sirup.

After the pineapple has been prepared by paring and removing the eyes, it can be left in slices or cut into cubes. In cutting hold the pineapple at the top and use a sharp knife. It is then placed in a wire basket or a piece of cheesecloth for the blanching. Blanching means to immerse the product in boiling water for a certain length of time to reduce its bulk and soften it.

Pineapples are blanched for five minutes. We scald peaches and apricots, which are soft fruits; but we blanch pineapples, apples and quinces, the hard fruits.

Scalding means to immerse the product in boiling water for a very short time–just long enough to loosen the skins. Blanching is just a longer period of scalding.

When you blanch pineapples use only enough water to cover them. This same blanching water can be used for making the sirup. It contains much of the pineapple flavor and there is no reason for discarding it.
But this is absolutely the only blanching water that is ever used. All other blanching water, particularly that in which vegetables are blanched, is full of objectionable acids that we want to get rid of, so under no circumstances must it be used. But with pineapples the object of blanching is primarily to soften the hard fiber, so there is no objection to using the blanching water.

After the pineapple has been in the covered kettle of boiling water for five minutes, it is held under cold water until cool enough to handle. Never let it soak in cold water, as that will impair its delicate flavor. After this it is packed into hot sterilized jars.
Rubber rings are put on the jars, the covers are put in place – not tigh – and the jars are put in the canner.

A thin or medium-thin sirup is best for pineapples. Measure the blanching water and to every two cups of it add three cups of sugar. If you wish the sirup thin heat until the sugar is dissolved. If medium-thin sirup is desired, boil it about four minutes or until it begins to be syrupy. 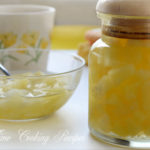 If anyone is getting broken jars this may help. I have been canning for a few years, and have learned some little tricks on my own that have helped me. Hope it helps you! I don’t always like doing cold food into hot jars and then into a hot water bath. It is easier to break the jars that way. The cold areas can crack the jars. Then all the work you have done is gone. There is a way to keep from breaking your jars. One very important step is to not put the tops on the jars tight… Read more »

could you give me the detail how to canning the pineapple and it’s sensory evaluation change or preserving after canning for a year?

pinapples is the way of life u can eat drink and live in a pinapple like spongebob…. I like TACOS!!!!!!!!