What is Semolina Pudding?

Semolina Pudding, or semolina porridge or cream of wheat, is a quick milk pudding, cooked on stove top and eaten for breakfast or as a dessert. It can be served with fruit compote or sprinkled with cinnamon and sugar.

I can still remember bowls of hot semolina pudding, with grated chocolate on top, which were served to us in kindergarten. Our teacher didn’t allow us to mix the chocolate into the pudding because she thought it looked too messy and gross. When eating it, we had to use a teaspoon to neatly scoop a row of semolina closest to the rim of the bowl, then circle toward the center to get to the chocolate. Nowadays I smile every time when I prepare semolina because I still eat it in the same way.

I used to think that wheat semolina does not have many health benefits, but recently I found out that is rich in B-complex vitamins, selenium and iron. I managed to purchased organic semolina made of spelt which is actually good for you. Semolina is also used as a healthy baby food all over the world.

How to Make Semolina Pudding?

Semolina Pudding can be made in two ways: on stove top (like regular porridge) or in a pressure cooker.

In 2015 I published a recipe for Semolina Pudding cooked on stove top (see below). Last few days I experimented with cooking semolina pudding in Instant Pot (electric pressure cooker).

First time I used the same ingredients as for the stove top version and cooked them on “Porridge” setting for 10 minutes. I used pot-in-pot method and quick pressure release. When I opened the lid, it looked like a disaster. There was a glob of thick semolina on the bottom of the pot and hundreds of lumps on top of it. I quickly whisked it, as vigorously as I could, to break as many lumps as possible. I even thought of using mixer, but gave up on it eventually. In the end it was edible, but I wouldn’t recommend the recipe to anyone.

The next day I repeated the procedure, but let the pressure release naturally. Honestly, I expected similar result as the day before. To my amazement, when I opened the lid, I found out that semolina was cooked to perfection. No lumps or globs or anything. Since milk does not evaporate at all from pressure cooker, I could have probably used 1/4 cup less, but I didn’t mind my pudding being a little thinner then usual. I was very pleased with it in the end.

The third day I tried using organic spelt semolina, the non-instant kind. This organic type has finer texture then regular semolina. The package direction called for 1:2 ratio of semolina to liquid, so I followed that direction. Instant Pot settings where the same as before: “Porridge” setting, 10 minutes, natural pressure release. It cooked pretty well.

CONCLUSION: If you need to prepare very quick breakfast, I would opt for instant semolina cooked on stovetop as it is done in 3 minutes. If you have a little more time on your hands, but don’t want to stand at the stove whisking the whole time, use Instant Pot with natural release method. For non-instant type of semolina, cooking in Instant Pot is, in my opinion, a better choice.

I made a video of how I cook Oatmeal in Instant Pot. The method is almost the same as for cooking semolina, so I included it here for you to see: 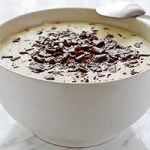 *If you use regular semolina instead of instant one, you’ll need to cook it for at least 15 minutes.

This recipe was first published on: February 7, 2015

Nice recipe.. however first time to know there is something called “instant semolina”

In Europe we have instant and regular semolina. Instant kind needs to be cooked for only 2-3 minutes.

I have never tried this pudding but yours looks so delicious! Thank you for submitting to yum goggle and please continue submitting! Kelli from YG

Thank you, Kelli, for your kind words! 🙂

I love the way flavors meld into the cream of wheat (simolina) no matter what you add to it nutmeg,cloves,allspice,cinnamon or the favorite chocolate.*

You brought back fond nostalgic memories to me as a child;except I remember my father making prophets porridge and i can still remembering him stirring in the anise,cloves and nutmeg made with love.thanks for the memory.

I’ve never tried it that way. All those spices must have been great.

It’s a cold snowy day, so when I came across this I had to make it! Warmed me right up, thank for the trip down memory lane! Think I’m going to make this more often with some tweaks, rather than having it just plain like I had today xx

It is snowy here, too!
I always it Semolina Pudding (or porridge) with grated chocolate on top. Let me know if you think of some interesting tweak.