There are two kinds of London Fog drinks: alcoholic cocktail and a non-alcoholic tea drink. The latter one is a combination of Earl Grey tea with lavender, vanilla and milk. It seems to be created in Vancouver, Canada, about 10 years ago. Later on Starbucks put it on its latte menu and so it became popular. The idea behind it was to create a comforting beverage to brighten your mood on cold, foggy or rainy days. Funny enough, in Scotland it is known as a “Vancouver Fog”.

Starbucks says the list of ingredients for London Fog drink is:

So, it is not too complicate to replicate the recipe.

You can use dairy or non-dairy milk of your choice. Whole milk is creamier, but low fat milk will create more foam. At Starbucks they’ve chosen to use 2% milk which is somewhere in the middle.

The bergamot essence, which is a kind of Italian citrus, is not so easy to find. Instead of purchasing black tea and bergamot essence separately, it is much easier to buy a box of Earl Gray Tea which is a blend of both of them. Add a little bit of lavender flowers to it and your tea base is done.

Instead of sugar syrup, you can use white or brown sugar (I use brown sugar which gives a slight caramel taste) or another sweetener of choice which does not have too strong taste. The only ingredient that is not so clear on Starbucks’ list is “natural flavors”. I guess it could be vanilla extract. Some say they use both vanilla syrup and caramel syrup in this recipe.

London Fog drink is a perfect choice when you need a little energy boost in the morning or midday. If you can find decaffeinated version of the tea, you can even enjoy it later in the evening. Tea lovers will certainly appreciate this simple yet rich and fragrant creamy delight. 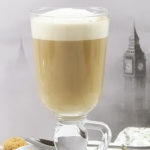 I love tea as well 🙂