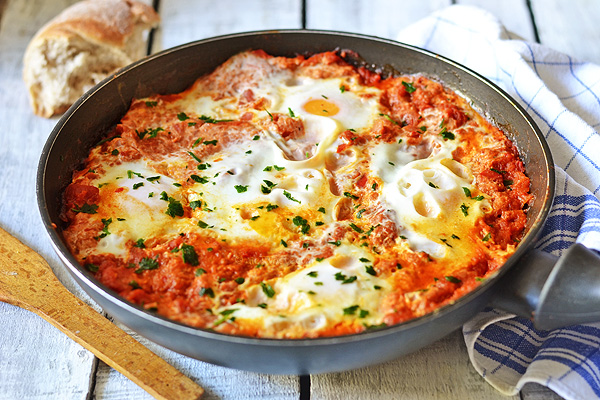 Shakshouka is Middle Eastern one pan dish consisting of suteed onion, paprika and tomatoes with eggs and spices. It is somewhat similar to Hungarian Sataras and Turkish Djuvec (minus eggs). 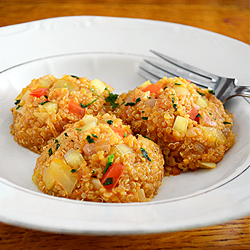 Shakshouka is usually served for breakfast. I think it is complete enough to be a lunch or a dinner dish.

It can be served with pita bread, crumbled Feta cheese and sprinkled with parsley.

Which country is Shakshuka from?

Despite becoming a well-liked meal in Israel, Shakshuka is not an Israeli cuisine.

How do you eat Shakshouka?

In addition to being served with rice or another grain of your choosing, Shakshuka is frequently eaten with bread or pita on the side for dipping.

Shakshuka has a savory and slightly tangy flavor due to its tomato-based sauce flavored with various herbs and spices.

How to make Shakshuka?

Before preparing Shakshuka, onions, peppers, and spices should be cooked in olive oil until soft and fragrant. Then add the tomato paste and chopped tomatoes to the pan and simmer for a while to create a thick sauce. Carefully crack the eggs into the sauce and cook until set. The dish can be topped with cheese and fresh herbs before serving.

What kind of dish is Shakshuka?

A simple one-pan recipe, Shakshuka is ideal for a speedy and filling brunch or breakfast.

How is Shakshuka traditionally served?

How are you supposed to eat Shakshuka?

Although some individuals like to use their hands and a piece of bread or pita as a utensil, Shakshuka is often eaten with a fork and knife.

When should we eat Shakshuka?

Although it is frequently thought of as a breakfast or brunch dish, Shakshuka can be had at any time of the day.

What do you eat with Shakshuka besides bread?

Shakshuka can be accompanied by a number of side dishes, such as rice, roasted vegetables, or a grain of your choice, in addition to bread.

Do you eat Shakshuka with your hands?

Shakshuka is frequently consumed with your hands, with the bread or pita serving as a spoon for the eggs and tomato sauce.

Why is Shakshuka so popular?

Popularity of Shakshuka is due to the fact that it is a tasty, hearty, and inexpensive dish that is simple to prepare and can be personalized with a variety of ingredients.

Why is Shakshuka healthy?

Shakshuka is nutritious since it contains a wealth of vitamins and minerals and is made from a range of vegetables. The recipe can be made even healthier by using more veggies or by using whole grain pita or bread in addition to the eggs, which serve as a healthy source of protein.

Do you eat Shakshuka by itself?

Shakshuka can be consumed as a main dish on its own or as a side dish with bread or pita.

Can you eat Shakshuka next day?

The eggs in Shakshuka may not be as soft and runny as they were when the meal was first prepared, but it is still possible to consume it the following day.

Can you reheat Shakshuka with egg?

Shakshuka should not be reheated while the eggs are still in the sauce since the rubbery, overcooked eggs may result. Reheating the sauce on the stovetop or in the microwave is an option. Just before serving, stir in some fresh eggs.

Can you eat leftover Shakshuka?

Shakshuka leftovers can be reheated on the stovetop or in the microwave and kept in the refrigerator for up to 3 days.

How do you store and reheat Shakshuka?

Shakshuka should be kept in the refrigerator in an airtight container for long-term storing and reheating. Transfer the sauce to a microwave-safe bowl or saucepan when you’re ready to reheat it, and heat it there until it’s well heated. Just before serving, put some eggs into the sauce and allow them to cook if you want to.

Why is Shakshuka so good?

What is Shakshuka with feta?

In a Shakshuka with feta variation, the eggs are topped with crumbled feta cheese. The acidic and salty flavor of the cheese complements the savory tomato sauce in the meal.

Can Shakshuka be made ahead?

Up to 3 days’ worth of Shakshuka can be prepared in advance and kept in the refrigerator. Transfer the sauce to a microwave-safe bowl or saucepan and cook it there until thoroughly warmed. The sauce can then have fresh eggs added right before serving.

How to say Shakshuka?

You pronounce shakshuka as “shahk-SHOO-kah”.

When was Shakshuka invented?

Shakshuka has a lengthy history and may have changed throughout time, therefore it is unclear when the meal was first created. But it is believed to have its roots in North Africa, particularly in nations like Tunisia and Morocco.

Why is my Shakshuka watery?

If your shakshuka is watery, the tomato sauce may have been overcooked or you may have used too much water, which caused the tomatoes to break down too much. You can experiment with cutting back on the water in the recipe or simmering the sauce for less time to remedy a watery Shakshuka.

Can you make Shakshuka without tomatoes?

While it is possible to prepare Shakshuka without tomatoes, the dish won’t taste as good or have the same texture. Use an alternative sauce, such as one that is velvety and prepared with coconut milk or one that is spicily hot and created with peppers and spices. Remember that the eggs might not cook as well in a sauce made without tomatoes, so you might need to alter the cooking time. 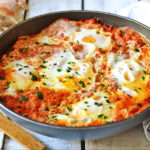