When I was a kid, my grandmother used to make egg drop soup very often because my grandfather liked it so much. She would cook wispy beaten eggs in either clear chicken broth or flour soup or even tomato cream soup. I must admit I didn’t like it at the time. Partly because I didn’t like eggs at all, and partly because that kind of soup didn’t look appealing to me.

When I grew up I ordered Chinese Egg Drop Soup from a menu in a Chinese restaurant. I don’t know whether it is its taste or looks that were so different from what I knew before, but somehow I happened to like it. I was surprised to learn that in Asia soup is served for breakfast, together with Scallion Pancakes (which were great, by the way).

In the beginning it seemed very strange to me, but after some time I got used to the idea. When you think about it, this low-carb, gluten-free, protein rich warm broth is so much healthier and lighter for the stomach than our traditional bread-butter-and-jam kind of breakfast.

It is pretty easy to learn how to make Egg Drop Soup itself.  The only thing I needed to master was cooking eggs in the soup. When you look at other egg drop soup recipes, they always tell you to stir the soup vigorously while slowly pouring a thin stream of whisked eggs into it. First time I made it, I stirred the soup a bit too vigorously, so it turned into some kind of weird custard pudding (not nice at all).

To make it easy for you, I found a clip on YouTube where a lady shows how exactly to do that so that you don’t make the same mistake as I did. Her ingredients are even simpler then mine. I added some oyster sauce, a bit of bacon and cooked corn to improve the taste and make it resemble more the restaurant recipe.

I hope Homemade Chinese Egg Drop Soup will become a simple dish you will enjoy with your family any day of the week. 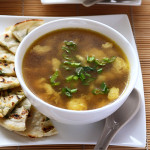 No takeout tonight,I made my own using your recipe. The video was very helpful and I loved the quick bread (scallion pancakes).