Instant Pot Okra Gumbo is a new twist on a traditional recipe; both vegetarian/vegan and chicken/sausage/seafood versions.

This is not exactly a classic New Orleans gumbo recipe. I did some things differently, like adding an unconventional ingredient. And I used an electric pressure cooker, thinking it would be quicker done in one pot.

What is the difference between gumbo and jambalaya? Even though the ingredients of both spicy and smoky dishes are similar, gumbo is a kind of soup or stew served on top of rice. Jambalaya is more similar to a stir-fry dish cooked in the same pan with the rice, like Spanish paella.

The base of most of Cajun recipes is a roux. It is flour fried in oil or butter and it can be white, blonde or dark. Some people fry flour until it is chocolate-brown, but I opted for milder tasting roux which had color similar to peanut butter. Since frying flour in oil is not healthy, I used my mom’s method of frying dry flour and adding oil in the end. I explained that method in my recipe for Eggless Cookie Dough.

I made the roux in the Instant Pot (IP) directly. It took my about 15 minutes of frequent stirring. During that time the IP went off once by itself – it looked completely dead, the display was off and everything. In a few minutes it turned on again. I suppose it was some kind of safety measure because the content of the pot was really hot and there was no liquid in it. After that it displayed the word “Hot” on the screen.

This is more of a base recipe which can be modified to taste. I made it vegetarian/vegan which doesn’t mean that you can’t include some meat or seafood. I started with a roux, then added a “holy trinity” of onion, celery stalk and green bell pepper. Okra, vegetable stock and seasonings were added and cooked until done.

In my area fresh okra is not readily available. I was so happy when a friend of mine brought me a jar of okra he bought from a Turkish store.

For an authentic Cajun chicken and sausage gumbo, add about a pound of cubed chicken meat and 1/2 pound of Andouille sausage to the recipe.

Add about a pound of peeled and deveined prawn or shrimp tails. I would also suggest one non-conventional ingredient: a tablespoon or two of oyster sauce. I tried it and it made a great difference of adding a layer of seafood flavor.

Gumbo can be either thin as a soup or thick as a gravy. Mine is quite thick. Be free to thin it out with some stock or water, if desired.

What to Serve with Gumbo

The most usual way to serve gumbo is over cooked long grain white rice. You can also serve some French bread, Cajun Potato Salad or green salad on a side.

Conclusion: If you have enough time, cook Okra Gumbo slowly on your stove top. When in a hurry, this recipe will be a good base to start your own version of the traditional dish. 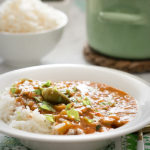 *At this point you can add other ingredients of your choice: 1 lb of cubed chicken meat and 1/2 pound of Andouille sausage for Cajun Chicken and Sausage Gumbo or 1 lb shrimp for Seafood Gumbo or more vegetables for Vegetable Vegan Gumbo etc.

Just going to make a comment here for people who may not know, Worcestershire sauce isn’t vegetarian in the slightest unless you get the vegan kind (or make it yourself). It has anchovies in it usually. Please be good to your veg friends and don’t serve them stuff without doing the research.

I think all of us veggies and vegans know this and that there is a easily available vegan alternative…..perhaps could be worth mentioning this?
Thanks for the recipe.