Basic Sofrito Recipe – learn how easy it is to prepare a large quantity of homemade sofrito (soffritto) for freezing. 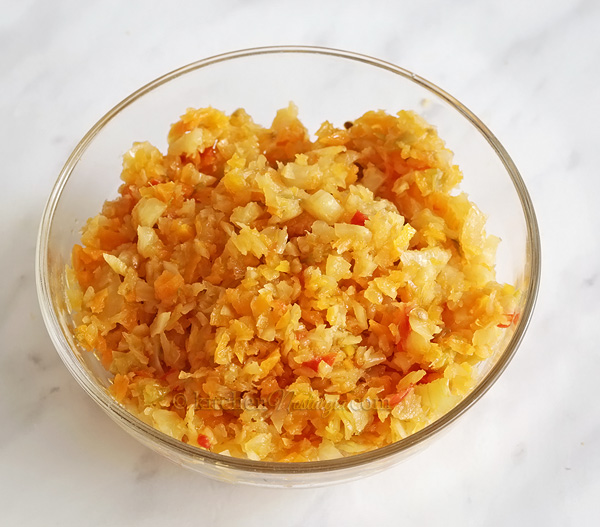 Sofrito (Spanish) or soffritto (Italian) is the base of most of my dishes. That’s what I’ve learned at home, that’s what my grandmother and my mom did and that’s what I’m doing as well. Almost every soup, stew, rice dish or meat sauce starts with making the  sofrito. 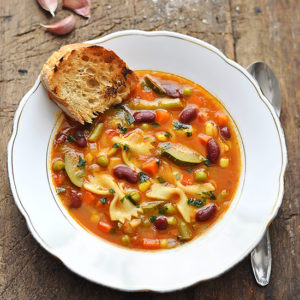 In my home we usually use the mixture of onion, carrots and celeriac (celery root) in 2:1:1 ratio. This is typical of northern, cuisine (Germany, Austria, Eastern Europe), while southern Europe uses celery stalks instead of celeriac. Italians call it the “holy trinity”. Spanish version (also used in Latin America, like Puerto Rico, Dominican Republic etc) contains leeks and bacon. Later on other ingredients were added like garlic, bell peppers and tomatoes.

The word sofrito itself means “stir-fried” or “sauteed”, because vegetables are sauteed in olive oil and/or butter.

I cook almost every day and I’ve noticed that the majority of time in preparing for cooking goes to peeling and chopping vegetables, mostly for sofrito. I wish I could simplify the process by making freezer meals for a month or at least for a week ahead. But I live in a relatively small apartment with a small fridge/freezer and that is not possible. Instead of preparing whole meals ahead, I thought of just preparing larger quantities of sofrito in advance and freezing them. They can be either just chopped vegetables, or vegetables already sauteed in oil. 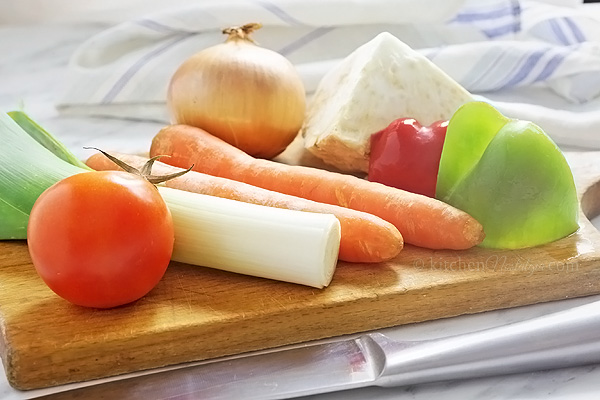 The quantity of vegetables you see in the picture above is enough for 1 liter (1 quart) ziploc bag. That is great if you plan to cook it all at once for a large family or gathering (like 8 portions of cooked meal). I would suggest using 2, 3 or 4 smaller bags (or even an ice cube tray) for individual portions as vegetables tend to freeze solid and it is hard to separate them afterwords. Of course, you can multiply the quantity as many times as you like. I believe sofrito should keep in the freezer for at least 3 months and probably even longer. Sofrito vegetables already sauteed in oil can be put in a jar and kept in the fridge for 3-4 days.

The picture below shows classic onion/carrot/celeriac combo on the left, while the bag on the right has leek, bell peppers and tomatoes added to the mixture. 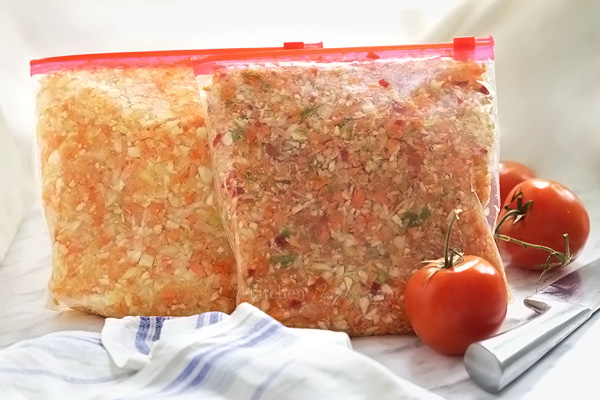 Vegetables for sofrito are usually diced by hand. That is the best option. But, if you’re making a large quantitiy for freezing, food processor is your best friend. Put all ingredients in its bowl and chop until fine. I don’t like to chop onions too much as it can release some funny aroma.

If you have picky eaters at home, you can use your food processor to chop vegetables very finely, as much as your processor allows, so that they cannot see them in the cooked dish. I use this method for dishes where I don’t want vegetables to be visible, for instance Pasta e Fagioli (Pasta and Beans). 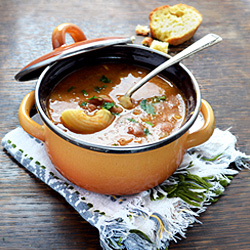 Below you will see more of a suggestion then the recipe for sofrito. You can tweak it any way you like to suite your style of cooking. 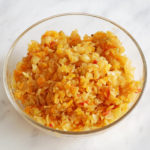 Multiply the amount of vegetables to suit your needs.

As in any recipe…it is whatever you were taught to use…most of is consider the tastes we grew up with are “the REAL” ones.

You are referring to the Latin American version, originating from Spanish sofrito recipe. I presented here more of an Italian/German version. I explained that in the text.