I published this recipe 7 years ago. Even though the recipe itself was really good, it went rather unnoticed, mainly because of my poor photography, as I was only learning how to do it at the time. This week I reshot it and I believe it looks much better now.

The recipe as such is a bit healthier then regular cinnamon rolls since it contains pureed sweet potatoes. In my opinion it is a great way to include your veggies into your meal.

I used orange sweet potatoes. They give such a nice color to the dough. I’m sure white sweet potatoes would work as well. I wouldn’t use purple ones, as I’m afraid the dough would turn gray (haven’t tried it, though).

These Sweet Potato Cinnamon Rolls are filled with cinnamon, butter and chopped walnuts. Pecans would work as well.

They are glazed with cream cheese frosting into which I’ve added some maple syrup and vanilla for flavor.

With a cup of tea or coffee, Sweet Potato Cinnamon Rolls make an ideal breakfast for lazy Sunday morning. 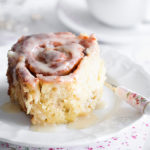 *I used full 3 cups flour because my sweet potatoes were cooked in water and full of moisture. You may need less flour if your sweet potato puree is more on a dry side.

**I suggest using brown sugar with finer grains if you don’t like it to crunch under your teeth. I was even thinking about processing it in coffee grinder (or spice grinder).

What a beautiful pictures. They look so delicious, I have to make them soon! 🙂

How could these possibily go unnoticed. Look great.

Thank you, June! These are new photos. I removed the old ones.