Italian Bechamel Sauce (or White Sauce) is one of the easiest sauces to make. And super versatile, too! 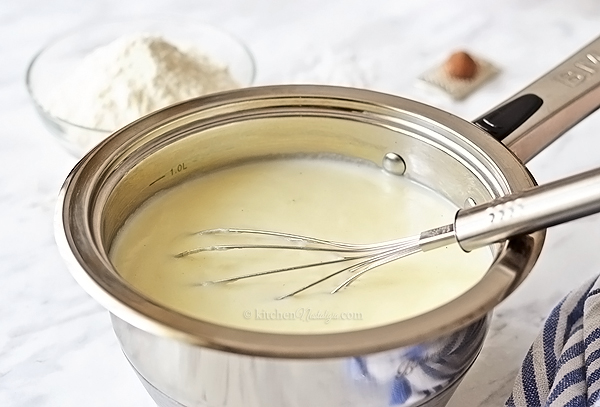 When I first learned cooking White Sauce, I had a simple Italian recipe stating that you need equal amounts of flour and butter, like 50 g flour and 50 g butter and 500 ml milk added to it. It gave me a nice, thick sauce that worked as a base for other sauces. As time went by, I realized I often needed much thinner sauce for dishes like lasagna, and I upped the milk content to about 700 ml. Each dish requires different thickness of the sauce, so it is best to start with a thicker one and then thin it according to your needs.

Usually ground nutmeg and white pepper are used for flavoring Bechamel Sauce. Nutmeg is really a must, while white pepper can be substituted with finely ground black pepper. It will not change the taste much, but it will not look as pretty. If you’re planning to use the sauce in casserole-type dishes (like Butternut Squash Lasagna), it doesn’t matter anyway. If you plan to use it as a base for Alfredo Sauce, it is better to use white pepper. 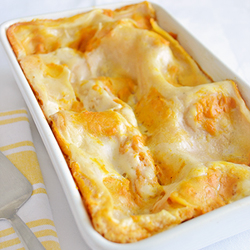 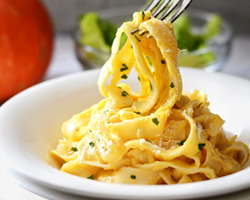 Bechamel sauce is one of the easiest sauces to make. The only thing that could go wrong is creation of lumps. I’ve learned through experience that lumps are creating if you’re not mixing it vigorously enough in the beginning and if you’re using hot milk. On the other hand, if milk is cold, it will take a long time and constant stirring to cook it. Because of that I’m making my sauce by first combining roux (flour and butter mixture) with a little bit of cold milk and then I add hot milk to the mixture. That way I avoid both lumps and long stirring. Another tip to get lump-free sauce is to use mixer. I know that famous chefs are making it with a whisk, but home cooks who are not so experienced can get really good results with handheld mixer.

White Sauce can also be frozen. When ready to use, let it thaw first . When reheating, whisk it constantly so that it doesn’t separate. You can also whisk in a little bit of cold butter as you reheat to help keep the emulsion. 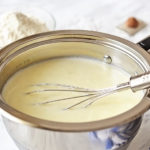 *For thinner sauce add up to 3/4 cup milk more.

It was worth of waiting for ! Your photos are great as usual. Thank you !

I found it easier to mix the sauce with s fork. Mixing the flour into the melted butter and when gradually addkng the milk into the mixture. Definitely no lumps.

Interesting! I always thought that the key is in fast and strong mixing.

When my sauces develop lumps I grab my immersion blender and in two seconds it’s perfect!! Please try fresh grated nutmeg, it makes a world of difference. I don’t grate and measure, I just grate until I think it’s enough.

What a great tip about freezing the bechamel sauce.I like to serve it over milanesa. 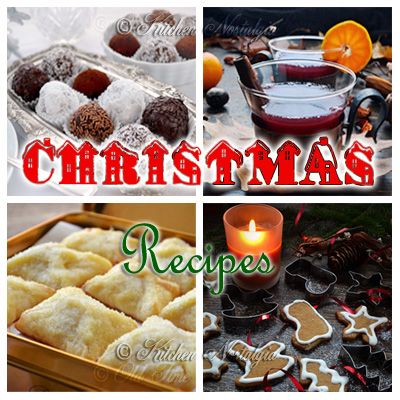